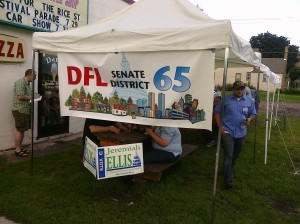 Wednesday, DFL endorsed candidate for Minnesota House of Representatives, Jeremiah Ellis (District 65A) held a ice cream social at the Dar’s Double Scoop. I made sure to enjoy a variety of ice cream flavors but I also enjoyed seeing the ethnic variety of supporters that came out for Ellis. This district consists of the Summit/University-Rondo, Frogtown, East Midway, North End, Capitol Heights and Mount Airy neighborhoods. The area is a mix of people from all around the world which consist of White’s, Black’s, Mexicans, Africans/Somalians, Hmong, Vietnamese, and Lao. Ellis has a fresh approach to politics and with this fresh approach he has been able to get District 65A engaged and excited about the upcoming election. The city of St. Paul has always been the center of our state. Before St. Paul became a city, it already had a rich history of diverse culture from around the world. 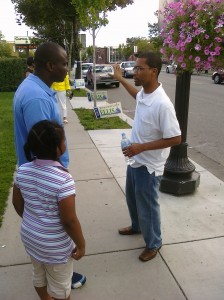 Burial mounds in present-day Indian Mounds Park suggest the area was originally inhabited by the Hopewell Native Americans about two thousand years ago. From the early 17th century until 1837 the Mdewakanton Dakota, a tribe of the Sioux, lived near the mounds after fleeing their ancestral home of Mille Lacs Lake from advancing Ojibwe. Following the Louisiana Purchase in 1803, a U.S. Army officer named Zebulon Pike  negotiated for approximately 100,000 acres of land from the local Dakota tribes. The territory was located on both banks of the Mississippi River starting from Saint Anthony Falls in present-day Minneapolis to the confluence with the Saint Croix River. Shortly after Fort Snelling was built on the territory in 1819 at the confluence of the Mississippi and Minnesota River, which formed a natural barrier to both Dakota and Ojibwe nations.

Fort Snelling allowed for the U.S. to display its military force to the English, French, and Indian tribes in this area. French Canadian fur traders, explorers, and missionaries came to the area for the fort’s protection. With the rise in population, a man named Pierre “Pig’s Eye” Parrant set up a tavern named the Pig’s Eye, near present-day Lambert’s Landing. By the early 1840s, the community had become important as a trading center and a destination for settlers heading west. Locals called the area Pig’s Eye or Pig’s Eye Landing after Parrant’s popular tavern. In 1841, Father Lucien Galtier was sent to minister to the Catholic French Canadians and established a chapel on the bluffs above Lambert’s Landing named for his favorite saint, Paul the Apostle. Galtier intended for the settlement to adopt the name Saint Paul in honor of the new chapel. In 1847, a New York educator named Harriet Bishop moved to the area and opened the city’s first school. The Minnesota Territory was formalized in 1849 and Saint Paul named as capital. On May 11, 1858, Minnesota was admitted to the union as the thirty-second state.

Minnesota history is full of extraordinary individuals and Jeremiah Ellis will soon become apart of that rich history. Before that history is made, Ellis will have to overcome two hurdles in order to win the seat and he definitely has the support of the community (and the DFL party endorsement) behind him. Ellis also has a long list of party supporters (you can view the list of all his endorsements and party supporters by going to his website: http://jeremiahellis.org/endorsements/). Ellis will have to over come his first hurdle in the primary on August 10th, when he faces a fellow District 65A member, Rena Maron. The second hurdle he will face, will be in the election on Novmeber 2nd, against weak GOP candidate Paul Holmgren. Ellis’s political resume isn’t long but he has held impressive posts such as the “constituent services” position  in U.S. Rep Betty McCollum’s office from 2005 until he started working for the St. Paul Public Schools Superintendent Meria Carstarphen in 2007.  Both position helped Ellis realize that it was time for him to take action and directly address social and political issues in his district. 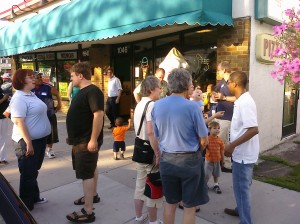 Ellis will be able to over come both hurdles, because of the strong community and party support he has been receiving. Ellis has been facing hurdles all of his life. Ellis is the middle child of five siblings and grew up in a working-class St. Paul family which was structured around relying on one and other for support. At an early age his parents taught him responsibility and how to work out issues. With his hard work supported with strong family values, he has been able to follow his life’s passion(s). He is a strong advocate of education and has directly worked with different schools in his community to help improve the delivery of curriculum and availability of support.  He wants to make his district a better place to live in and planes on doing that by addressing the districts economic viability of neighborhood business’s, educational resources, engagement with the community, and equitable distribution of state resources  into the district. District 65A is located in walking distance of the Capitol and to some all it does is cast its shadow over the community. Jeremiah Ellis, is the extraordinary individual that  history has chosen to lead District 65A back into its historic prosperity.

Last reply was 9 months ago