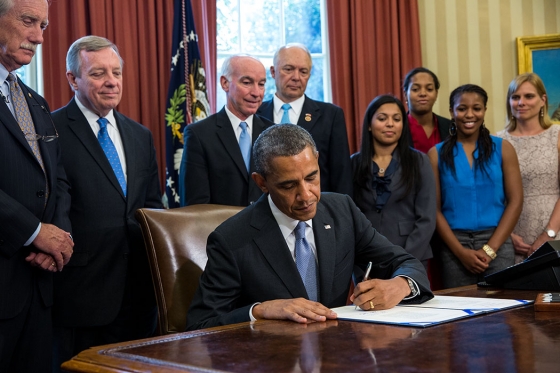 John Kline (R-MN-02) was not the only person in Washington to witness President Obama sign the increase in Student Loan interest rates legislation … and but hopefully, he got to hear President Obama’s words on Friday :

As we speak, right now, for the 85 percent of Americans who already have health insurance, they are benefiting from being able to keep their kid on their plan if their kid is 26 or younger. That’s benefiting millions of young people around the country, which is why lack of insurance among young people has actually gone down. That’s in large part attributable to the steps that we’ve taken.
You’ve got millions of people who have received rebates, because part of the Affordable Care Act was to say that if an insurance company isn’t spending 80 percent of your premium on your health care, you get some money back. And, lo and behold, people have been getting their money back. It means that folks who have been bumping up with lifetime limits on their insurance, that it leaves them vulnerable. That doesn’t exist.
Seniors have been getting discounts on their prescription drugs. That’s happening right now. Free preventive care — mammograms, contraception. That’s happening right now. I met a young man today on a bill signing I was doing with the student loan bill who came up to me and said thank you — he couldn’t have been more than 25, 26 years old — thank you; I have cancer, thanks to the Affordable Care Act working with the California program, I was able to get health care and I’m now in remission. And so right now people are already benefiting.
Now, what happens on October 1st, in 53 days, is for the remaining 15 percent of the population that doesn’t have health insurance, they’re going to be able to go on a website or call up a call center and sign up for affordable quality health insurance at a significantly cheaper rate than what they can get right now on the individual market. And if even with lower premiums they still can’t afford it, we’re going to be able to provide them with a tax credit to help them buy it. And between October 1st into March there will be an open enrollment period in which millions of Americans for the first time are going to be able to get affordable health care.
Now, I think the really interesting question is why it is that my friends in the other party have made the idea of preventing these people from getting health care their holy grail, their number-one priority. The one unifying principle in the Republican Party at the moment is making sure that 30 million people don’t have health care and, presumably, repealing all those benefits I just mentioned — kids staying on their parents’ plan; seniors getting discounts on their prescription drugs; I guess a return to lifetime limits on insurance; people with preexisting conditions continuing to be blocked from being able to get health insurance.
That’s hard to understand as an agenda that is going to strengthen our middle class. At least they used to say, well, we’re going to replace it with something better. There’s not even a pretense now that they’re going to replace it with something better.
The notion is simply that those 30 million people, or the 150 million who are benefiting from the other aspects of Affordable Care, will be better off without it. That’s their assertion — not backed by fact, not backed by any evidence. It’s just become an ideological fixation.
Well, I tell you what, they’re wrong about that. There is no doubt that in implementing the Affordable Care Act, a program of this significance, there are going to be some glitches. No doubt about it. There are going to be things where we say, you know what, we should have thought of that earlier. Or this would work a little bit better. Or this needs an adjustment. That was true of Social Security. That was true of Medicare. That was true of the Children’s Health Insurance Program. That was true of the prescription drug program, Part D, that was rolled out by a Republican President and supported by Republicans who are still in the House of Representatives. That’s true, by the way, of a car company rolling out a new car. It’s true of Apple rolling out the new iPad.
So you will be able to, whenever you want during the course of the next six months and probably the next year, find occasions where you say, ah-ha, you know what, that could have been done a little bit better. Or that thing, they’re kind of making an administrative change; that’s now how it was originally thought this thing was going to work. Yes, exactly. Because our goal is to actually deliver high-quality, affordable health care for people and to reform the system so costs start going down and people start getting a better bang for the buck. And I make no apologies for that.
And let me just make one last point about this. The idea that you would shut down the government unless you prevent 30 million people from getting health care is a bad idea. What you should be thinking about is how can we advance and improve ways for middle-class families to have some security so that if they work hard, they can get ahead and their kids can get ahead.

President also gave a shout-out to Chairman Kline as he signed the “Bipartisan Student Loan Certainty Act of 2013” … Rehashing for those that have not followed how Chairman Kline and House Republicans increased the rates … such that a 3.4% Stafford loan last term will now cost 3.86% next term … this affects 8.8 million students.
These loans will now be linked to the financial markets, specifically to the 10-year U.S. Treasury plus a handling fee … for example, undergraduate Stafford (2.05 percentage points above the base rate which is now at 1.81 percent); graduate Stafford Loan (3.6 percentage points); and PLUS Loan (4.6 percentage point).
The Congressional Budget Office estimates that the government will generate $184 billion in profits from its college loan programs over the next decade. For 2013 the CBO has projected that the U.S. will make a record $50 billion off federal student loans.
Chairman Kline likes to say that his program was based on President Obama’s proposals to use US Treasury rates … but he fails to acknowledge that the President requested 0.91% adder and when added to the 1.81% Treasury Rate would have produced a SAVINGS for students (2.72% versus the old 3.4% — THANKS Chairman Kline)

Remarks by the President at Student Loans Bill Signing
Oval Office
2:21 P.M. EDT
THE PRESIDENT: Well, before I sign this, I just want to say thank you to this extraordinary coalition that helped make this signing possible. I want to thank Chairman Kline, all the members of both House and Senate from both parties that came together to design a sensible, common-sense approach to keeping student interest rates at a reasonable level so that young people have a better opportunity to go to college, get the education that they need not only to better their own lives but also to strengthen the country’s economy.
And I want to thank the advocates, including some of the young people I suspect will be benefiting from lower student loans — or lower student loan interest rates — because without their voice, without their participation, we probably would not have gotten this bill done.
Last point I’ll make, and I suspect the Senators and Congressmen behind me will agree with this, even though we’ve been able to stabilize the interest rates on student loans, our job is not done, because the cost of college remains extraordinarily high. It’s out of reach for a lot of folks, and for those who do end up attending college, the amount of debt that young people are coming out of school with is a huge burden on them; it’s a burden on their families. It makes it more difficult for them to buy a home. It makes it more difficult for them if they want to start a business. It has a depressive effect on the economy overall. And we’ve got to do something about it.
So I’m going to be looking forward to engaging this same coalition to see if we can continue to take additional steps to reform our higher education system

So there are two takeaways from Friday … students are benefiting from the Affordable Care Act … and the job is not done on the cost of higher education.

For his part, Chairman Kline issued a press release :

Aug 9, 2013
Press Release
WASHINGTON – Congressman John Kline issued the following statement after visiting the White House this afternoon when President Barack Obama signed into law H.R. 1911, the Smarter Solutions for Students Act (also known as the Bipartisan Student Loan Certainty Act as amended by the Senate):
“I’m pleased to join President Obama in the Oval Office for the signing of H.R. 1911. This is a great day – not just for students and their families, but for all Americans. Seeing this bipartisan proposal become law reminds us of what can be accomplished through hard work, compromise, and faith in the legislative process. I look forward to building upon this success as we work toward other shared goals, including raising the bar in the nation’s classrooms by revamping federal K-12 law, strengthening job training opportunities for American workers, and improving college affordability and access through the upcoming reauthorization of the Higher Education Act.”

Notice that never once did he acknowledge that the Job is not done … that he has raised rates … and has ignored Pell Grants … and created a positive cash flow of $184 Billion for the US Treasury … yet he titled his press release : President Obama Signs Kline Student Loan Legislation Into Law

Students and parents are not fooled … the Job is not done … Chairman Kline needs to hold hearings on Tom Petri (R-WI-06) legislation Earnings Contingent Education Loans (ExCEL) Act of 2013.
Under the ExCEL Act, borrowers would pay an affordable percentage of their income until the loan is repaid.

“It’s pretty simple if you think about it,” said Representative Petri. “When students graduate from college, traditionally they will make less. And then as they progress in their professional career they’ll earn more. The repayment schedule should follow this trend so that borrowers pay less early on and more as they earn more.”
“Right now, when students take out loans to invest in their education, they are too often running the risk of financial ruin that comes with failing to pay back student loans,” said co-sponsor Jared Polis. “The ExCEL Act streamlines our complicated student loan system and provides protections that help young people to pay back their loans and establish good credit. I am proud to support a system that will keep student loan payments affordable and make it easier for young people to succeed.”

President Obama says the Job is not done … Republican Congressman Tom Petri agrees that more needs to be done … when will Chairman Kline agree ? If he does not, the Republicans need to give the Chairman’s gavel to Tom Petri.