Has your email box been getting filled from Minnesota politicians ?
First, it was one from Al Franken.
Then one from Tim Walz.
Followed by one from Amy Klobuchar.
Most recently from Mike Obermueller.
All with the same message — Citizens United.
Funny, no email from John Kline on the subject.

Yeah, you remember Citizens United — the landmark Supreme Court decision that determined corporations and other groups have the same free-speech rights as individual citizens, therefore removing restrictions on corporate spending on elections. This lead to Mitt Romney’s insightful analysis, “Corporations are people, my friend,” … of course, he was admitting that Corporations are his friends.

So, now we have Corporations picking their candidates … rewarding Democrats as well as Republicans … not always in the same amounts … after all, you can never know when you might need them.

Let’s look at one company … that has been in the news in the past … a London-based corporation that likes to extract its product from within American territory … and their December political donations … and just one state in particular — Montana.

Gosh, that was just one state … they also donated to multiple-candidates in Alabama, North Carolina, South Carolina as well as federal candidates … in total 108 campaigns got targeted …. Or shall we say in Romney languague, BP made a few friends with a little cash.

BP may be wanting to make sure that they have “friends” in Montana after John Kline issued his press release after the U.S. House of Representatives approved H.R. 1965 The Federal Lands Jobs and Energy bill. The legislation seeks to expedite oil-and-gas drilling permits and make more federal lands available for energy development.

That’s the power of Citizen’s United … states can become a political takeover without anyone noticing.

While BP may be spreading its money around, there is another strategy … just target one influential Member of Congress.

Well, that’s what the Voice For Trees PAC “contribution request form” states.
According to FEC filings at this time, the Voice For Trees PAC has made only one donation to a Member of the House … John Kline.
Why, John Kline ?
Simple, John Kline is the Chairman of the Education and Workforce Committee … as such, he holds the gavel over legislation affecting safety … the Voice For Trees PAC mission is to “advance tree care businesses.” One of the primary ways to protect and advance the industry is through attempts to influence public policy in a direction favorable to our members — particularly, OSHA safety standards and reducing regulatory burdens, especially with regard to the Clean Water Act.

While Corporations like BP and special interest groups like Voice For Trees are taking over at the state level and at the Committee Chairman level, your voice can be heard by signing Al Franken’s petition :

We, the undersigned, have had it. Corporations are not people. Elections should not be auctions. And we refuse to let our democracy be put up for sale.

We are standing together to call for a constitutional amendment to overturn Citizens United. 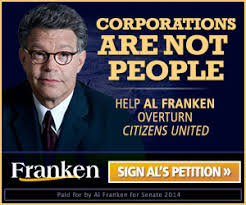 Also by calling your Member of Congress and asking them to become a co-sponsor of the bi-partisian H.R.148 – DISCLOSE 2013 Act.