Last week, the Kline For Congress campaign announced a unique event with a Special Guest

Unique … because you had to be approved to “listen” to the call. For those waiting for the media to report what was said …. Well, everyone is still waiting.
John Kline is good at the Silent Treatment (just like he addresses “politically sensitive issues” by obstructing … giving them the “silent treatment”.)

But within minutes of the start of the event, there was an endorsement :

"There is a model of 'citizen servant' in Congress and that's John Kline… It's about principle. It's not always about party." – @AllenWest

Funny thing is that Allen West had written a post just the previous day about a “National Embarrassment”.

As reported by Becket Adams at The Blaze, “Roughly $104 million worth of food stamps were redeemed at military commissaries in 2013, according to the latest data from the Defense Commissary Agency. Military families used food stamps to purchase milk, cheese, meat and bread at the military grocers, CNN Money reported.”
“I’m amazed, but there’s a very real need,” said Thomas Greer, spokesman for Operation Homefront, a group dedicated to assisting soldiers in financial straits. Food stamp participation in the U.S. military saw a sharp increase in 2008, during the worldwide financial meltdown, and it has risen every year since.

Allen West blamed the Obama Administration … something that Allen West has done repeatedly over the years.

But in this case, doesn’t it sound odd for Allen West to be complaining about food stamp cuts … when they are being cut at the insistence of the House Republican Party.

The Roundtable has already “recognized” John Kline for his vote to cut food stamps by $40 Billion as well as the veterans’ legislation that he has given the “Silent Treatment” … (see this commentary and the accompanying Mike Thompson artwork.)

But Allen West has made plenty of “informative” comments … who could forget his April 2011 speech at the Women Impacting the Nation event :
“We need you to come in and lock shields to strengthen up the men that will go into the fight for you. To let these other women know, on the other side, these Planned Parenthood women, the Code Pink women, and all of these women who have been neutering American men and bringing us to the point of this incredible weakness, to let them know that we are not going to have our men become subservient. That’s what we need you to do.”
Allen West added that the Judeo-Christian heritage of the United States was at stake.
“It really is a spiritual confrontation about the soul of these United States of America.”

Surely, we all remember Allen West’s reaction when President Barack Obama opposed the House-approved Kline budget plan that privatizes Medicare.
“I am sick and tired of this class warfare, this Marxist demagogic rhetoric that is coming from the President of the United States of America.”

Of course, Allen West must be pleased with John Kline’s recent vote to cut Medicare to provide increase COLA amounts for military veterans above what was authorized in the Paul Ryan Bipartisan Budget Act of 2013.

Kline PAC Supports Corrupt Candidates
Since 2005, the Watchdog group, Citizens for Responsibility and Ethics in Washington (CREW) has highlighted the most egregious violators of the public trust in its annual Most Corrupt Members of Congress report.

Lieutenant Colonel Allen West is a candidate in the Republican primary for Florida’s 22nd congressional district. Col. West previously served as a battalion commander in the Army’s Fourth Infantry Division in Iraq. Col. West was stripped of his command and forced to resign for assaulting an Iraqi citizen during a harsh interrogation. In response to an intelligence report alleging a threat against Col. West and the men who traveled with him, he ordered the apprehension of Iraqi policeman Yehiya Kadoori Hamoodi. Although it was not Col. West’s job to conduct interrogations, he nevertheless interrogated Mr. Hamoodi. Col. West allowed his soldiers to beat Mr. Hamoodi on the head and body. After the beatings, Col. West threatened to kill Mr. Hamoodi and shoved his head into a sand-filled barrel into which he fired at least one gunshot. Col. West later admitted that he couldn’t remember how many shots had actually been fired. After the gun was fired, Mr. Hamoodi “admitted there would be attacks” and gave names of alleged conspirators but subsequent investigations found no evidence of a plot to kill Col. West. At a military tribunal on the incident, Col. West admitted he was not sure any corroboration of a plot was ever found and he may have been wrong about Mr. Hamoodi. Although the tribunal found Col. West guilty of three counts of aggravated assault and thought that his actions merited a court martial, his admission of guilt and his long record in the Army allowed him to return home to retire with a mere $5,000 fine.

With an endorsement from Allen West and Michele Bachmann’s PAC donation, John Kline is the TEA Party favorite.
There is talk that Allen West may run for President in 2016 … so the obvious ticket would be 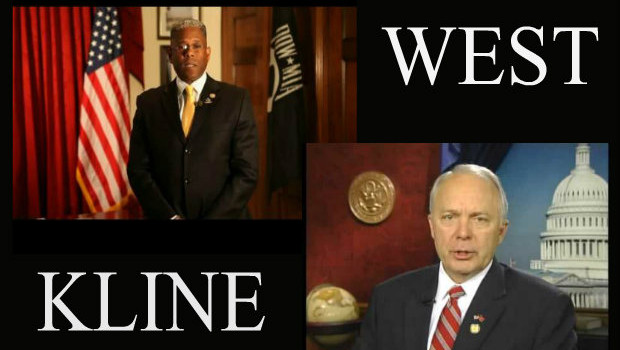