Let’s get the discussion going with a little “straight talk” … discussing immigrant children at the border :

He added: “Listen if you’re 14, 15, 16, 17 years old and you’re coming from a country that’s gang infested, particularly with MS-13-types. That is the most aggressive of all the street gangs. When you have those types coming across the border, they’re not children at that point. These kids have been brought up in a culture of thievery. A culture of murder, of rape. And now we are going to infuse them into the American culture. It’s just ludicrous.”

Next up, Pope Francis, as the religious leader of more than 1 billion Catholics worldwide, urged “intervention” from the U.S. government to make sure “these children are welcomed and protected.” He also called for sympathy, citing the children’s desire to get to the United States “in pursuit of a hope that in most cases turns out to be vain.” Pope Francis also recalled the children’s struggles as “they are forced to leave their families and unfortunately still subjected to racist and xenophobic attitudes.”

Wow … that’s two different views … immigrant children at the border are not children at all but gang affiliated persons from a culture of thievery, murder, and violence … and the counter is that these children are being “subjected to racist and xenophobic attitudes.”

Finally, let’s hear from Chairman John Kline … well, Chairman Kline would rather focus on politics of the moment … not the immigrant children on the border but his hearing :
“Protecting America’s Youth: An Update from the National Center for Missing and Exploited Children.” The hearing provided Congress the opportunity to examine the National Center for Missing and Exploited Children’s ongoing work. “The center just does amazing and almost unimaginably challenging work, and we thank you for that,” Chairman Kline said. “In Minnesota alone, NCMEC worked on 1,699 endangered runaways, 373 family abductions… you’re one of those agencies in which everyone is busy coming up with new ideas all the time, because you’re on a mission, and it’s reassuring to know that you’re there.
Despite its impressive achievements, we must do more to protect our most vulnerable youth.”

Hmmm … someone seems to be more concerned with staying on message that Sex Trafficking can save the GOP as demonstrated by this clip “Together, Let’s End Human Trafficking”

Ah, yes, Chairman Kline … always the politician … avoiding making outrageous comments and timing the congressional hearing to be able to issue a press release to tout the GOP message and his committee’s work in “public-private partnerships to help protect children from abduction and exploitation” … which is his way of not acknowledging his past press release in which he advocated cutting federal support — for example, Chairman Kline’s press release of September 17, 2013 trumpeting his championing funding for Missing and Exploited Children Act, “Authorize funding for the Act at $40 million for each of the five fiscal years (FY 2014-FY2018)” … which sounds a whole lot better than John Kline pushes to cut funding from $65 million to $40 million.

Isn’t it time that the House Republicans explain why they have not allowed a vote on comprehensive immigration reform ? If they had established firm rules, this crisis at the border may have been averted. 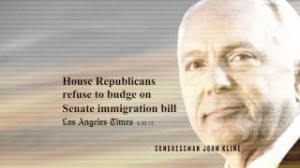