HBO’s Real Time with Bill Maher came to Northfield’s The Grand!  I emailed my friend to get tickets.  Boom.  He was already in line.  Done.   Sunday we made signs for a pre-Maher  anti-Kline rally.  Finally  attention is being  paid to what Kline does instead of what he says right before an election. 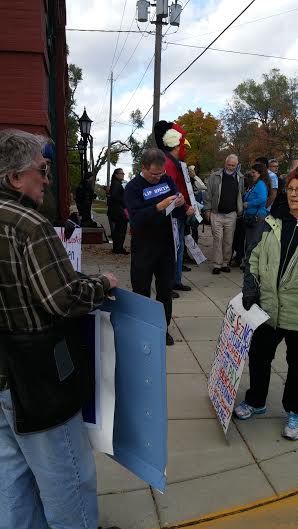 Ralliers noticed funeral director Andy Langehough looking busy across the street.  I was glad to see CD2 chair Susan Morevac head over there to make sure we weren’t interrupting any bereavement.  Andy has helped my family deal with grief, three times over, with one of the funerals involving gruesome, accidental death. That’s how it works in small towns.  Everyone is connected and you’ll feel better if you’re respectful.

Documentarian Alexandra Pelosi shot footage of the ralliers.  Yes, that Alexandra Pelosi!  I was reminded that San Francisco Huffpo writer and cool technology Silker Kyle McCarthy nominated Kline to #flipadistrict.  He first alerted me to the problems of student debt and for-profit scam and had a lot of respect for Pelosi.   And there she was, looking quite human. 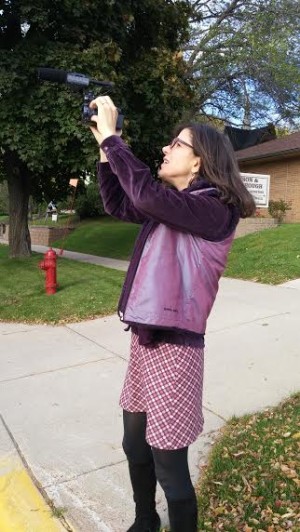 I saw Gone With the Wind in the ’80’s at The Grand.  Red velvet chairs, great popcorn, and ancient curtains made the night.   The Grand used to be a speakeasy, and I was one of the few people who snuck down there to see broken bottles from the ’30’s nestled in the dirt foundation.  Eventually The Grand became an event center and my daughter Ruth came to understand fine food and dining as an employee. And here I was, again, in that historical setting.

Former Minnesota House of Representatives Steve Sviggum entered and no one looked up.  I went to school with Steve’s sister Missy, and his brother Dick tried to save my father on the racquetball floor. Steve Sviggum is a good old boy who might not realize where the Republican party has gone these last few years.  Would Maher be able to overcome Minnesota nice?  At least  Minneapolis mayor Betsey Hodges was there to smartly assess what is being talked about.

The room exploded in cheers when Bill Maher entered the room.  I’ll blog news reports on this event in my next posts.