Ah, the failings of national media outlets to understand Minnesota was on display again when the National Journal wrote :

Democrats are perhaps most up­beat about their chances in the seat that Republican Rep. John Kline is vacating in the Twin Cities’ South Sub­urbs.
Demo­crat Angie Craig faces a clear path to the nomination, while Republicans are contending with a messy, four-way primary fight. Jason Lewis, the GOP’s most controversial candidate, won the endorsement of Minnesota Republicans, while Kline’s preferred successor, Darlene Miller, is not running an imposing campaign.

Apparently, the National Journal did not get the recent mailings from Darlene Miller … promoting her as a “Republican” with “Real-world experiences” and “Conservative values” that “we need her leadership in Congress” “to take Islamic terrorism seriously.”

The one mailing is “good” intro for a candidate that has never been on a ballot before … promoting her as a business owner — “managing a payroll and balance budgets.”

Sounds great … of course the mailer fails to mention her use of Small Business Administration programs (SBA 7(a) loan early in her ownership and her 2007 acquisition of the building was made possible through an SBA 504 loan) and advocating the Bush stimulus program … which allowed her to acquire equipment and reduce manpower.
Nor, her involvement in the US Chamber of Commerce … advocating for various programs such as the Export-Import Bank — which is opposite of the view of another business candidate — Donald Trump :

Miller:
You know, I am definitely for free trade. Ah I think it benefits all of us. I ah work with companies as a small business who do business in many different countries. And it brings jobs to my business and many other businesses.

Hmmm … once again, a little different view than Donald Trump

Gosh, could any of these government-backed programs help explain how Miller could be the wealthiest candidate based on

Yep, sure shows how using government programs can be make a business successful … at least for the business owner.

Yet, it is the second mailing that takes the focus off her success and evokes the fear card … wannabe-Congresswoman Miller chastises Congress for failing to debate and vote on an Authorization for the Use of Military Force (AUMF) for the war against the Islamic State in Iraq and Syria (ISIS).

Sure sounds like Wannabe-Congresswoman Miller would have co-sponsored Tom Emmer’s H.J.Res.73 – Declaring that a state of war exists between the Islamic State and the Government and the people of the United States and making provision to prosecute the same … and if she would have then Congressman Emmer would have gotten ONE supporter.

Actually Congressman Emmer failing to get support for his resolution is probably not a surprise as the House voted down H. Con. Res. 55 which would have required that Congress vote on an AUMF for this war … voting NO included current Second District Representative John Kline.

No, wannabe-Congresswoman Miller has a “plan” advocating that “we stop the political correctness and prosecute and win the war” … yet the mailer does not provide any details.
Ddoes her plan require a larger number of American troops on the ground ?
Is she willing to “go it alone” or require working with the Kurds, Sunni tribes, and other partners — and what if those other groups do not support her “methods”?
It is reported that ISIS and its affiliates now operate from safe havens in 13 countries: Syria, Iraq and Libya which she mentioned but also in Egypt, Yemen, the Philippines, Algeria, Afghanistan, Pakistan, Somalia, Kenya, Mali and Nigeria — will they be next on her target list ?

Further the Miller “plan” includes “restoring sanctions on Iran” — so important to the “plan” that it is in bold.

Funny thing is that ISIS, which is comprised of Sunni Islam extremists, while Iran is essentially the other sect of Islam (Shia) — arguably Iran has been supportive of Hamas, Hezbollah and not been helpful in calming the Syrian situation but why inject this into the “destroy ISIS plan” ?

Why ? Well, ’cause it supports her assertion that “President Obama cut a nuclear deal with Iran giving them nearly $100 billion to fund terrorism”
A quick reading of that phrase would seem to imply that American taxpayers are giving Iran money … a lot of money.
The actual amount is about $60 billion, estimates Garbis Iradian, chief economist at the Institute of International Finance. U.S. Treasury Secretary Jack Lew pinned it at $56 billion, while Iranian officials say $35 billion, according to Richard Nephew, an expert on economic sanctions at Columbia University’s Center on Global Energy Policy.
Regardless of the amount, the fact is that American taxpayers are not giving Iran one cent … the monies has been held in escrow-style accounts that remained in banks in Asia, including China and India, as well as Turkey … off-limits to Iran while the sanctions were in place … the monies represent payments from other countries who received waivers to purchase Iranian oil and gas during the sanctions. Further, Iran will not have all the assets at its disposal because some of it is tied up in debts. For example, about $20 billion is obligated to China, which worked around the sanctions to finance infrastructure projects in Iran.

OK, so the Miller “plan” is vague … yet she has been endorsed by John Kline … begging the question, did Miller “earn” the endorsement because John Kline saw so many flaws in the other Republican candidates ? After all, it was in February that the media was reporting that “John Kline is disappointed in and ‘concerned’ about the fundraising of the field of Republicans running to succeed him”

Well, there are a lot of Minnesotans who have been disappointed with John Kline … and Darlene Miller does not seem to be an improvement.

Yep, your mailbox may be filling up with more mailers extolling the virtues of Darlene Miller … but read them with a critical eye … the August 9th primary has four candidates vying for the Republican nomination … don’t go for the one that sent the most mailers. 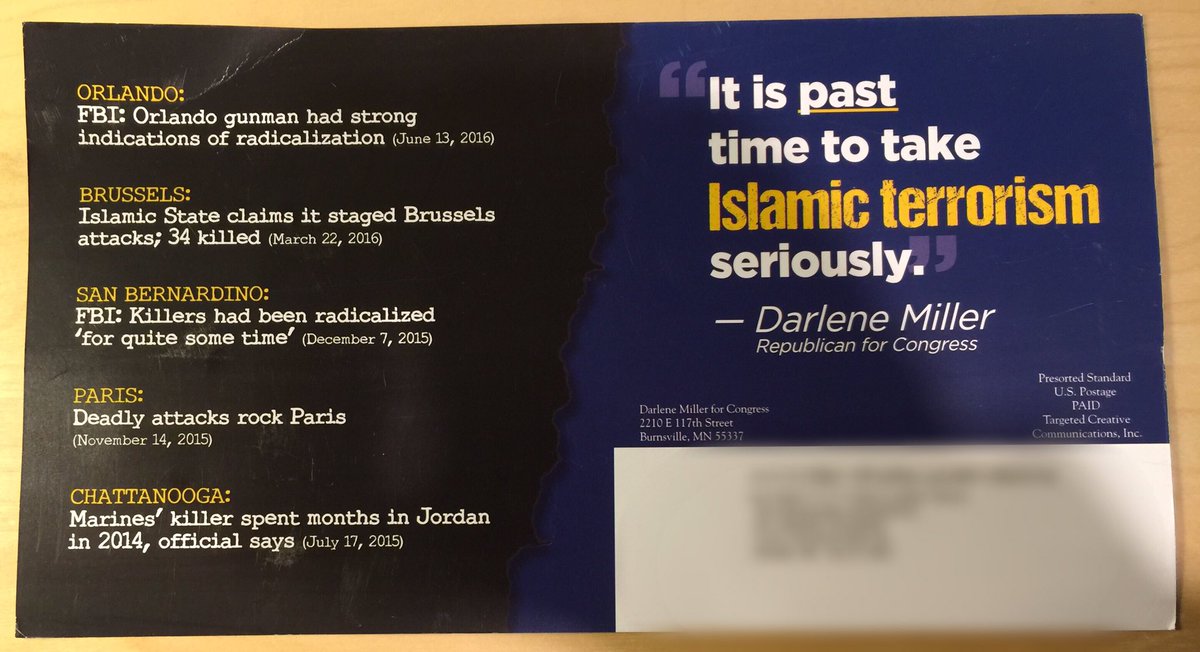 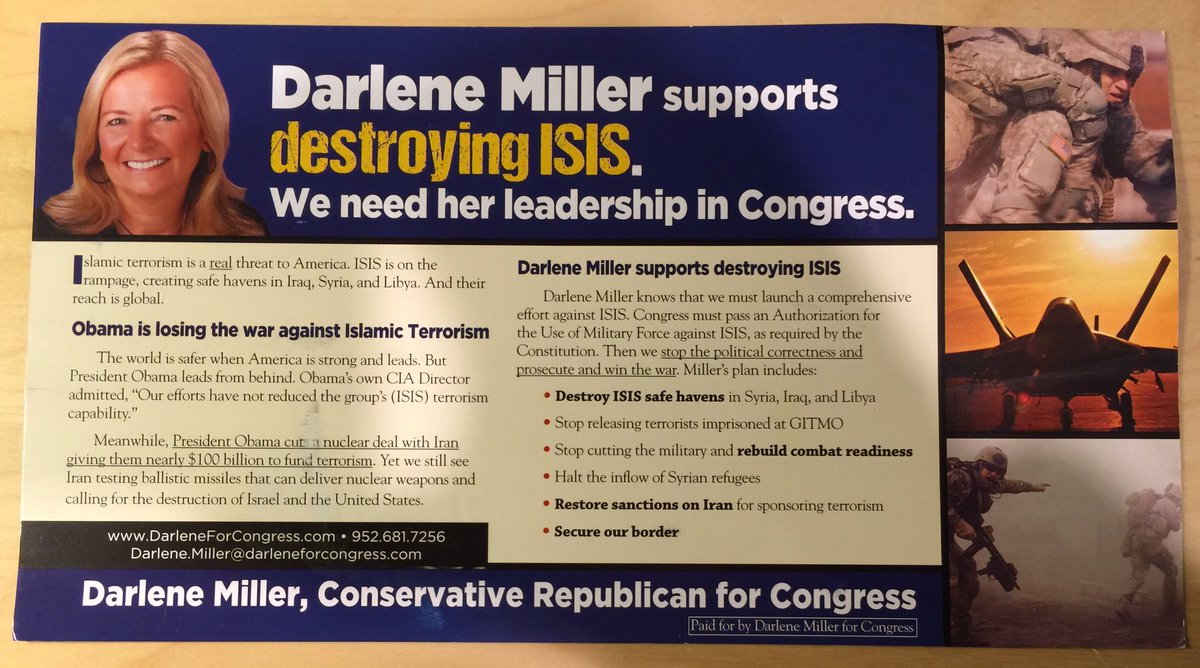