The April 2nd, CNN’s State of the Union with Jake Tapper broadcast featured Minnesota Second District Congressman Jason Lewis … and it’s a good thing it wasn’t broadcast on April 1st because viewers might have thought they were being “punked”.

The program started with a discussion of Flynn-Nunes-Russia story, followed by separate interviews with Jim Jordan (FreedomCaucus-OH-04) and Commerce Secretary Wilbur Ross and then finally the panel discussion featuring “Representative” Lewis.

“Representative” Lewis would seem to be the perfect panelist … a man who relied on controversial rhetoric and partisan warfare for over two decades on the radio was now a Member of Congress. Further, he had expressed during the primary campaign that he would join the Freedom Caucus … but after winning the November election, he said he would not join that group, saying it is important for the district that he remain independent … and vowing to objectively view the Trump Administration saying “I’m not just going to be a rubber stamp.”

“Representative” Lewis rejected the idea of an independent commission to review the potential of Russian involvement in America’s election process … (actually he seemed quite pleased with the work being done by Senator John Warner – who has long retired from the Senate although he did vote to create a National Commission on Terrorists Attacks Upon the United States [aka 911 Commission] … Mark Warner is on the committee).
Lewis defended Chairman Nunes staying in charge of the House investigation (gosh, isn’t it good that America has Chairman Nunes … obviously no one else on the Committee could ever do as good a job as him … including Members who have had more years on the Committee … yeah, there is no way that Peter King or Frank LoBiondo could be given the responsibility.)

TAPPER: What do you think?

OK … so what do we know about Ivanka Trump ?
Ivanka Trump, who is 35, spent her first two college years at Georgetown University then transferred to the Wharton School of Finance at the University of Pennsylvania where she graduated with a bachelor’s degree in economics in 2004. Ivanka was a model and operated a relatively small apparel line branded with her name. And of course, she is known for appearing on The Apprentice and The Celebrity Apprentice alongside her father, and for writing a memoir/career advice book, THE TRUMP CARD. 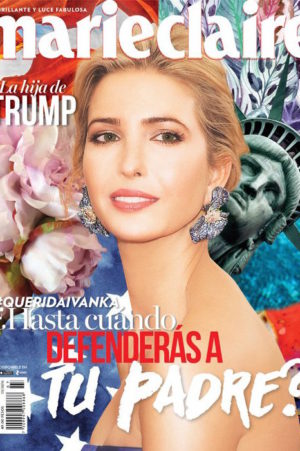 Thus instead of attesting to Ivanka Trump’s qualifications for her new assignment, “Representative” Lewis harkens viewers back to the Kennedy Administration and the appointment of Robert Kennedy as Attorney General.

OK .. we can agree that both were 35 when appointed and both wrote a book … but “Representative” Lewis sorta dismisses Kennedy’s background.

Yet it is true that Robert Kennedy was not Perry Mason … he had never tried a suit before a judge or jury, nor had never chosen a jury or written a trial brief yet there are aspects of being Attorney General that justify the appointment.
Such that, readers of the book ROBERT KENNEDY: HIS LIFE by Evan Thomas might take exception to “Representative” Lewis assessment.

When the Democrats won back control of the Senate in 1955, Bobby became chief counsel of the Senate Permanent Subcommittee on Investigations. With communist hunting out of favour in the wake of [Joseph] McCarthy’s excesses, Kennedy steered the committee towards government corruption.
In August 1956 Kennedy got the members of the investigations subcommittee to authorize a preliminary look into racketeering by the labor unions. Such an investigation would be politically risky, given the power of Big Labor in the Democratic Party. Still, Kennedy started at the top: he picked as his first target the nation’s largest and richest union, the Teamsters, the 1.3-million-man union that dominated the trucking industry.
On December 27, 1956, Kennedy called on Senator John McClellan of Arkansas, chairman of the investigations subcommittee, at his apartment, and laid out the evidence that he had collected against the Teamsters. A crusty, righteous Baptist from a conservative southern state, McClellan was perfectly willing to investigate racketeering by Big Labor. To appease labor’s defenders, however, a special committee would have to be created, with four senators from McClellan’s investigations subcommittee and four from the more sympathetic and pliable Labor Commitee. The new committee’s mandate would be to look at wrongdoing by management as well as labor. Thus, on January 31, 1957, was born the Select Committee on improper Activities in the Labor or Management Field, better known as the Rackets Committee.
The thirty-three-year-old Kennedy had a virtually free hand with the Rackets Committee. Chairman McClellan was fond of RFK and shared his moralistic sense of good and evil. Kennedy’s staff grew and grew until it had over a hundred investigators, by far the largest staff on Capitol Hill.
In September 1959, after 1,525 sworn witnesses and more than 500 hearings produced 46,150 pages of testimony, Robert Kennedy resigned as chief counsel of the Senate Rackets Committee.
Kennedy took time in the summer of ’59 to draft a book about his investigations called THE ENEMY WITHIN.

On January 14, 1961, The Judiciary Committee unanimously approved Kennedy’s nomination as Attorney General which lead to his approval by the full Senate. Kennedy held the post until resigning on September 3, 1964.

It’s funny that “Representative” Lewis questions Robert Kennedy’s “experience” … yet, did we hear any concerns when Andy Puzder was nominated to be Secretary of Labor … you remember the fast-food CEO who routinely violated labor law and faced discrimination lawsuits from employees at his Hardee’s and Carl’s Jr. restaurants ?

Or, how about Betsy DeVos, Trump’s Secretary of Education (who received bipartisan NO votes only to be approved when Vice-President Mike Pence broke the 50-50 tie.)
DeVos is a graduate of Calvin College in Grand Rapids, Michigan, where she earned a Bachelor of Arts degree in economics — not Education.
DeVos served as chairman of The Windquest Group, an enterprise and investment management firm. DeVos has also served on the boards of numerous national and local charitable and civic organizations, including Mars Hill Bible Church, the Kendall College of Art and Design, and let us not forget ArtPrize.

ArtPrize started in 2009, takes place in DeVos’ hometown of Grand Rapids Michigan over 19 days. ArtPrize has hardly made a splash beyond Michigan state lines. Unless you are drawn to paintings that depict a Miss America-looking Lady Liberty, welcoming about ten caricatures of different ethnicities into the United States. A soldier holding a machine gun stood guard in the corner of the painting, ensuring the protection of the newly arrived Americans.

ArtPrize is considered kind of a joke in much of the art world, and may most be beneficial to the real estate interests of the DeVos family — they own several buildings downtown, including the Amway Grand, and have their name plastered on everything they donate to including the city’s convention center and the city’s main performing arts center. (Gosh, is that what counts in TrumpWorld, getting your name on buildings?)

Beyond her board work, DeVos has/had investments in Apollo Investment Corp., which currently has investments in Delta Educational Systems Inc., a company that operates several dozen private for-profit college campuses.

So, Secretary DeVos does not have years of experience in public schools and may owe more of her selection to being a longtime contributor to various Republican candidates, yet “Representative” Lewis doesn’t seem to be concerned.

Well, may be because he knows that Secretary DeVos has staff able to help her … like Robert S. Eitel of BridgePoint Education, Inc. who is now working as a special assistant to her.

Mr. Eitel is on an unpaid leave of absence from BridgePoint — corporate owner of for-profit colleges — where he spent the past 18 months as chief compliance officer for a company which is involved in multiple government investigations, including one that ended with a settlement of more than $30 million over deceptive student lending.

Yep, Trump ran on a theme of Drain-the-Swamp … instead as he is stacking Washington with his own cronies … and getting assistance from “Representative” Lewis.

Of course, we know in our hearts that if Hillary Clinton had won, “Representative” Lewis would be spouting a different tune … today, he is comfortable in his role on television as a RubberStamp Defender of the TrumpEstablishment.

It didn't take long for the swamp to drain @realDonaldTrump. No shame, Mr. President. Almost everyone succumbs to the D.C. Establishment. https://t.co/9bDo8yzH7I