PREFACE :
Erik Paulsen regularly issues a video Correspondence Corner in which he responds to constituent questions.
It is a great ploy — Congressman Paulsen determines what question is to be answered … thus, providing him an opportunity to portray himself as effectively responding to issues that he wishes to address as if they are the most critical issues that voters want addressed.
The MN Political Roundtable will be evaluating Congressman Paulsen’s responses and encouraging readers to offer their own assessments.

Quick Quiz :
Who said : “Reagan proved that deficits don’t matter” ?
Who said : “This is the United States government… you never have to default because you print the money.”
Who said : “The people deserve a government that works for them, not one that buries them in more debt.”
Who said : “One of my top priorities in Congress is bringing fiscal sanity to Washington.”

While you ponder those quiz questions, let’s watch the most recent edition of Erik Paulsen’s Correspondence Corner.

Gosh, where has Michael been … he must be the only Minnesotan not see the many self-congratulating press releases from Congressman Paulsen about human trafficking legislation that he has supported. It’s an issue that no one opposes … and pretty easy issue to promote when you have failed to address the issues that need to be addressed.
Heck, it was back in January 2014 that the MN Political Roundtable asked the question : “Will sex-trafficking save the GOP ?” … and sure enough, that was an accomplishment that Republican cited in the 2014 mid-terms … then when 2015 started and House Republicans were facing divisions, everyone united behind more trafficking legislation … thus, it would appear in 2016 campaign pieces … so, why would 2017 be different ?
Congressman Paulsen responded to Michael’s email, by informing him that the House with bipartisan approved three bills last week … making it 16 bills related to human trafficking.

Yep, just a little another pat on HIS back by Congressman Paulsen.

Then he turned to an email from Deb of Bloomington who urged Congressman Paulsen to support tax cuts for small business … specifically regarding expensing of new equipment.

Gosh, where has Deb been … she must be the only Minnesotan not to know that Congressman Paulsen is “a champion of small business” which is boilerplate comment in Paulsen press releases.

Congressman Paulsen responded to Deb’s email, by informing her that he fully supported the changes she requested.

Funny thing is that Congressman Paulsen did not mention previous legislation that he has voted for — H.R. 636, America’s Small Business Tax Relief Act of 2015, which would make permanent increased small business expensing in Section 179 of the tax code.

That was a bipartisan bill that passed last session … in fact, it was sponsored by Tom Emmer and John Kline … and earned YES votes from Erik Paulsen, Rick Nolan, Collin Peterson and Tim Walz. There is no doubt that Republicans and Democrats agree on one thing — our tax code needs updating.

That bill would have done exactly what Deb wanted … for her small business.

The bill died in the Republican-controlled Senate.
WHY ?

Yes, that bill would have done exactly what Deb wanted –for her small business– but it would have added $77 billion to our deficit–so much for fiscal responsibility.
The Senate, wisely knew that this was just the start of what could come by making certain traditional tax extenders permanent without offsets … which would be followed for the other traditional tax extenders … in the end, $500 billion or more would be added to deficits over the next ten years.

During the debate on the bill, the discussion was not so much on the policy, but instead if it should be paid for.
The “fiscal conservatives” were all for ignoring the impact to the debt while the fiscally responsible ones realized the “ploy” that was being set-up.
Fiscal insantiy versus fiscal responsibility !

The debated featured some insightful banter from Sandy Levin
… “this isn’t about small business. We favor 179. This is about monkey business, monkeying with procedure,”
… “trying to rig the system with baseline games and making permanent tax provisions outside of tax reform.”
“By massively increasing the deficit–this is so important–through permanent unpaid-for tax revisions, Republicans could later cite this debt that they created as a reason to take a hatchet to programs like Head Start or fail to adequately fund the vital research at the National Institutes of Health.”

Although, the Senate did not act on H.R. 636, America’s Small Business Tax Relief Act of 2015, it did extend and improve the S.179 sections when it enacted Protecting Americans from Tax Hikes Act. Those “small business expensing” provisions expire on December 31, 2017 … thus Deb’s plea is appropriate.
Also appropriate is to establish fiscal sanity by paying for the tax cuts.

So Deb of Bloomington got the answered she wanted … Congressman Paulsen full support.
Sadly, the so-called “MathGuy” knows that he has just fooled the public with that he is working for tax reform but without a pay-for would mean that the deficit will increase.

Thus the question that needs an answer : “Do deficits matter to Congressman Paulsen ?”

BTW … the answers for the Quiz Quotes are
Dick Cheney said: “Reagan proved that deficits don’t matter” ?
Donald Trump said : “This is the United States government… you never have to default because you print the money.”
Paul Ryan said : “The people deserve a government that works for them, not one that buries them in more debt.”
Erik Paulsen said : “One of my top priorities in Congress is bringing fiscal sanity to Washington.”

Fiscal sanity starts with elected leaders willing to acknowledge that to address the deficit, tax cuts must be paid for. 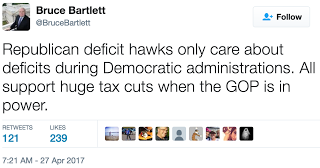