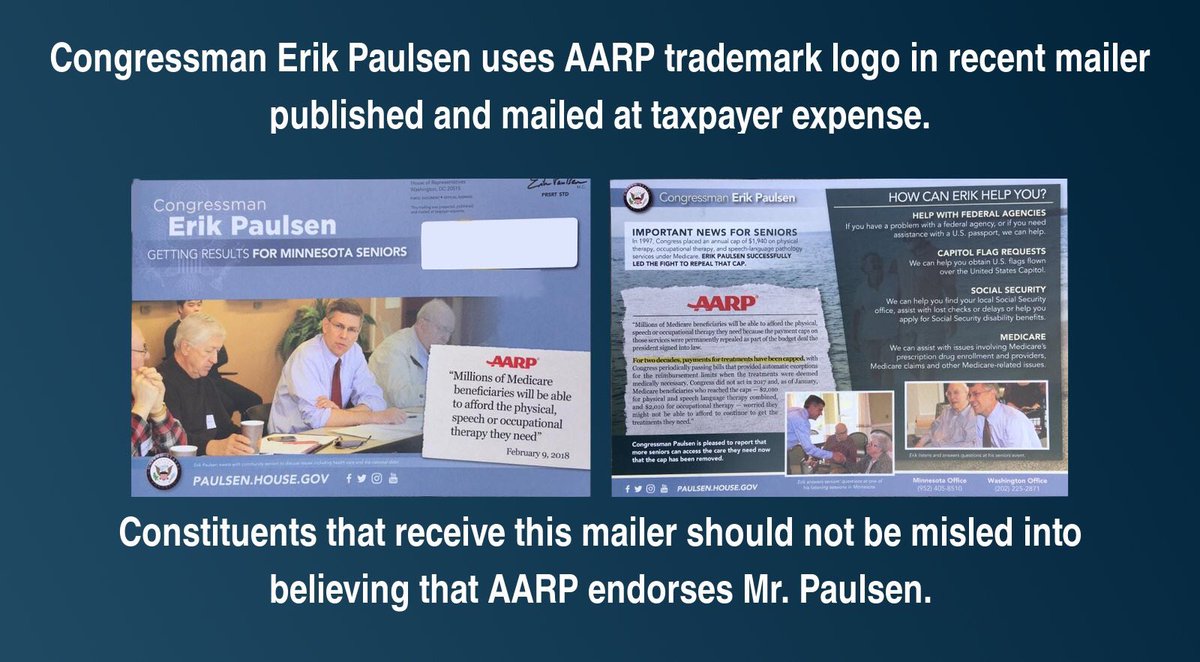 “Getting results for Minnesota seniors” is the claim … but 380,195 Minnesota participants in Medicare Cost Plans are losing their coverage … and while other members of the Minnesota delegation are trying to stop this, Third District Congressman Erik Paulsen is notably absent.

A more accurate assertion is that “Erik Paulsen is getting results for insurance companies that profit off Medicare Advantage plans.”

“Representative” Paulsen sells one thing but reality is something different.

“Representative” Paulsen wants voters to think that AARP supports him … in fact, AARP Minnesota stated that “We did not authorize the ad from Congressman Paulsen’s office that mentions AARP and uses the AARP logo, and we did not participate in its production.”
Another fact is that “Representative” Paulsen is a prime proponent of the Republican American Health Care Act of 2017 (HR 1628) which AARP opposed writing “The American Health Care Act would make health care unaffordable and inaccessible for millions of Americans.”
Further according to a letter sent to Congressional leadership, AARP CEO Jo Ann C. Jenkins condemned the Tax Cuts and Jobs Act because of the likelihood that it would lead to “dramatic cuts to Medicare, Medicaid and other important programs that serve older Americans.”

“Representative” Paulsen however does support Medicare Advantage plans … those are plans offered by private insurance companies (aka #PaulsenDonors).

If you are not an expert on Medicare insurance options (and if you know of one, please leave your name and number because you are a rare breed), you may know that there are Medicare Part A (hospital insurance), Medicare Part B (medical insurance) and Medicare Part D (drugs) plus insurance company-offered Medicare Advantage programs as well as supplemental plans, etc.
Seniors have a lot of choices because coverage can vary.

But one change that some seniors are now hearing about … and getting concerned about … is as a result of the Paulsen-backed H.R.2 – Medicare Access and CHIP Reauthorization Act of 2015.
As part of that legislation, many Medicare Cost Plans are scheduled to end in 2019.

Medicare Cost Plans are essentially an HMO with the option to opt out of the limited network and see any doctor using traditional fee-for-service Medicare.
Simply stated, Medicare Cost Plans offer an advantage for many Minnesotans that find Medicare Advantage plans to restrictive — they can see providers and hospitals outside of a Medicare Advantage plan’s network or service area.
Under a Medicare Advantage plan, consumers must see providers in-network and either pay out-of-pocket or a higher premium if they happen to be traveling outside of their coverage area.
According to Jean Wood, executive director of the Minnesota Board on Aging, attributes the popularity of Medicare Cost plans to the large number of “snow birds” – older adults who move to a warmer climate for several months during the year. “People can leave Minnesota and their Medicare Cost plan reverts to original Medicare Part A and B, which they can use fairly easily when they are out of state.” Wood said. “They appreciate having that flexibility.”
The same is true for retirees that frequently travel or visit family for extended periods of time (you may live in the metro, but got a cabin in Wisconsin).
According to Kaiser Family Foundation analysis, there were 380,195 Minnesotans participating in Medicare Cost plans.

Surprised ?
Nah, remember that when you lose your Medicare Cost Plan, you will likely become a customer of a Medicare Advantage Plan … which are the ones pushed by #PaulsenDonors who “Representative” Paulsen really represents.

The Trump Administration failed to respond to the pleas of 7 (of 8) members of the Minnesota delegation.

“Representative” Paulsen has not sponsored the bill … which is a bad sign since the bill was assigned to his Ways and Means Committee.

Come Election Day, let’s remember who sends out taxpayer-funded mailings touting that he is “Getting results for Minnesota seniors” … and who is offering solutions to the needs of Minnesota seniors.