Robert Bierman is a DFL candidate for the Minnesota House in District 57A. He has never run for office before. He has quietly gone about the daily task of operating a family business. He has never lobbied. He has never advocated for anything at the legislature. Never testified before a committee. And just to be clear, he has never been interviewed by the Minnesota Jobs Coalition.

Now, why the MN Jobs Coalition? Because they are sending negative hit pieces about Mr. Bierman, explaining to the voters of District 57A how he will vote if he is elected. They never asked him about it….they just know. Here is an example of what they are sending out…. 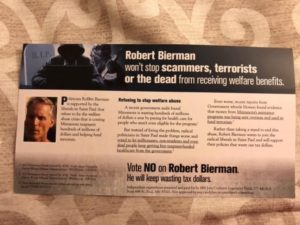 I’ll talk about the small print in a minute, but the top headline with the spirit of death pictured is probably enough to give you the kind of trash this illustrates.

Gosh, surely you wouldn’t vote for someone like that – if that was their intent. But clearly it is not.

Robert Bierman has never cast a vote in the legislature. And of course he can’t stop such things because that can only be done by the current legislature – which, by the way, is controlled by the MN GOP and supported by the Minnesota Jobs Coalition. So, in essence, they are telling us that we cannot allow Robert Bierman to come to the legislature  because he won’t stop what is already happening under GOP control. Making sense?

Now let’s get back to the small print. Here is their distorted assertion:

“A recent government audit found that Minnesota is wasting hundreds of millions of dollars a year by paying for health care for people who aren’t even eligible for the program. But instead of fixing the problem, radical politicians in St. Paul made things worse and voted to let millionaires, non-residents and even dead people keep getting free taxpayer funded health care from the government. Even worse, recent reports from government whistle blowers found evidence that money from Minnesota’s assistance programs was being sent overseas and used to fund terrorism.”

Gosh, Robert, what the heck did you get into? But as any rational person would know, Robert does not support such things. Actually no one does. Democrat or Republican. He also had nothing to do with any of it happening, because once again, he has never cast a single vote yet. What the MN Jobs Coalition wants to do is push the buttons of outrage. They know that their base and uninformed voters are going to be angry about their tax dollars being wasted. And yes, we all feel that way. But the idea that some people game the system to get public dollars for their own use is always there. Some people will cheat and the legislature in its oversight capacity must guard against that kind of cheating.

But, let’s state this once again for clarity. The Republicans control the legislature. They hold the power of oversight. They are the ones responsible for ending these practices that outrage them so much. Obviously they must have failed because they are stating quite clearly that it still goes on – but blaming Robert and Democrats is much easier than trying to explain their own failure.

I also want to note the use of terrorism here. What the Jobs Coalition is, once again, blaming on Democrats who are not in power, is a report that there are a few fraudulent day care centers in the Somali Community who overcharged the state and do send that money back to Somalia. The Somali population, as a whole, send a lot of money back to Somalia as they try to help support family and friends in a war torn country.  Fraudulent day cares that send money back are probably funneling some of their money to the Al-Shabaab groups – and they certainly need to be stopped. But what is being done by Republicans is to lump all Somalis that send money back home into this fraudulent group. That is another gross distortion and unfair to the majority of the Somali population who are simply trying to help their families survive.

But, once again, I need to point out that the current legislature is the entity that is supposed to provide the oversight to root these problems out. And once again, they must have failed because they are pointing out its existence in this flyer. Republicans are blaming Democratic candidates who have never cast a vote for the GOP’s failure in responsibility. Well, I shouldn’t say the Republicans are doing it directly – the MN Jobs Coalition is. An independent expenditure group that is funded by Republican donor sympathizers.

The MN Jobs Coalition is the most cynical and dark form of political organization. They are negative – always negative – in what they do. They distort. They obfuscate. They scare. And they have no moral compass.

You will see these flyers all over the legislative landscape. They swap out Robert’s name for the local targeted candidate. They don’t change anything else. Same flyer, different target. It is a cynical political game. Every election year, we play this dance and these flyers come out in force. This year seems to be earlier than most – I would assume that the MN Jobs Coalition has gotten a particular large infusion of money from some MN billionaire intent on keeping Republicans in power.

It is funny because it really has nothing to do with Jobs. Jobs is not their goal. Power is the goal. Holding power. But putting Jobs in the name seems like they actually care. They don’t. Trust me.

If you pay attention, this type of negative junk mail will have little effect. An informed voter will know that this makes no sense. But they count on the outrage of the uninformed to achieve their purpose.

So be vigilant and explain the truth to your neighbors and friends. And vote for Robert Bierman and his colleagues to really fix these problems.