For over a decade, there was a constant refrain from Minnesota’s Third District Congressman, Erik Paulsen … the need to restoring Fiscal Discipline to Washington 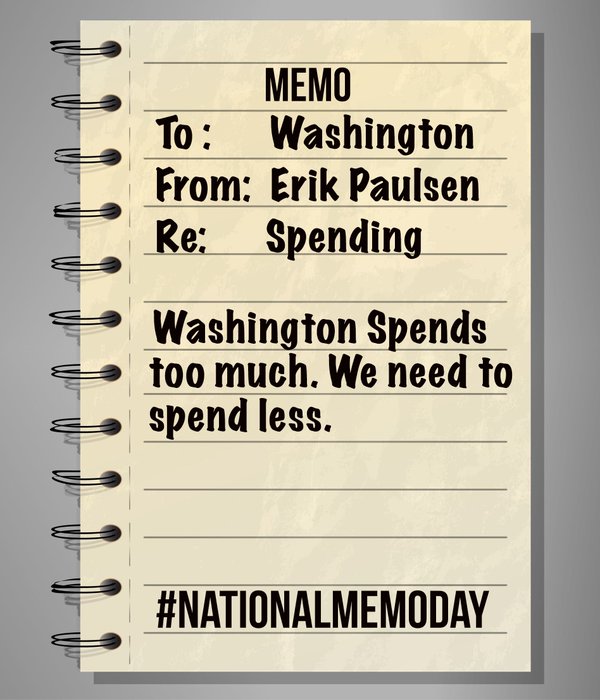 You deserve a government that spends its money as wisely as you do. Washington needs accountability, transparency, and more leadership to get our country’s fiscal house in order.

For too long, Washington has spent money it doesn’t have without any regard for the future.

Some could say that was until Donald Trump was elected … but Erik Paulsen’s questionable spending has been cited before in the Strib link and on the MN Political Roundtable link. Yep, the self-professed fiscal conservative, Congressman Paulsen has been known to use funds from his Members’ Representational Allowance (MRA) that seem to be unnecessary.

Taxpayers should feel better that Congressman Paulsen’s spending has exhibited some levels of fiscal discipline (albeit his mass mailings and lodging should have lower.)

BUT … there is a concern … Congressman Paulsen was defeated in his re-election bid … so he could spend his entire budget without any concerns.

Well …. other Members of Congress have used their MRA to provide some pretty nice bonuses to their staff as they exit.

Take for example, John Kline who retired in 2016 after representing Minnesota’s Second District.

This is not unusual … and has been going on for years

House members spent about $21.5 million more on their office payrolls for the fourth quarter of 2010, when bonuses are traditionally paid, than they spent for the average of the three previous quarters, according to LegiStorm, a Washington group that tracks congressional pay.

Considering Congressman Paulsen’s mantra — “Washington spends too much. We need to spend less.” — would question termination bonuses as something that should be curtailed.

Congressman Paulsen has a staff of roughly 13 employees … and if he follows John Kline’s practice, that could mean the taxpayers spending $78,000 on pay.

$78,000 is just one Member’s staff …. there are over 80 Members of the House that will not be returning next term … and that means the taxpayers would be on the hook for millions.

And another hook … lump-sum severance using taxpayer dollars appears to be a violation of House rules.
The House Ethics Manual says, “compensation may be received only for duties performed within the preceding month.”
And the Members’ Congressional Handbook says an employee must “perform official duties commensurate with the compensation received.”

This will be a test for Erik Paulsen … will he be true to his mantra … or is he a fiscal fraud that duped Minnesota’s taxpayers ?
IF he intends to award bonuses, he should explain to the taxpayers’ what the criteria that was used to determine the amounts.