Let’s begin with this as our main premise. Abortion is not murder.

I would assume that a number of Republicans will now tune out and end any participation in reading this. That’s OK, because I have come to accept the close minded references about abortion on demand as the murder of a human being.

But the science of the matter is much broader and deeper in nuance and mystery.

My son goes to the University of Minnesota Duluth. So we trek up and down Interstate 35 quite often. Along the way we are always exposed to those Pro-Life baby billboards which utilize guilt and shame as a method of moving the needle on your opinion on abortion.

Let’s examine a few of those….. 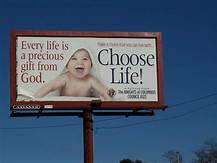 So every life is a gift from God? Well, it depends on what you believe. Making a health procedure a moral question is a little bit pretentious, isn’t it? When you say that, you are actually skipping over a number of moral questions. When does life start? Is a fetus a human being? How are we different from the animals? A few too many assumptions there.

Human reproduction follows a similar pattern to many animals in nature. Fetuses are conceived via sexual intercourse and take up the dual chromosome patterns of the parents. But are these cells that begin to divide and form… an actual human being in a real sense? Once a zygote forms it cannot live on its own. It does not look human, it cannot think, and it is more a body part of the mother than an actual life.

People who are anti-choice try to “give” actual life to these cells by extrapolating them into a fully developed human right from the moment of conception. Let me just say right now, life at conception is a fallacy. And the abortion restrictions that do not recognize that are deeply flawed.

There are a lot of emotional metaphors about the heart.  Songs and poetry abound about human emotions that originate with the mythical human heart. However, the truth of the matter is that the heart is just a muscle. It signifies little except that it pumps blood throughout the body. One absolute fact about the heart is that its beats do not signify life. It is essential to sustain life, but its only connection to actual life is the metaphorical connection to emotions.

If a fetus has a heartbeat after 18 days, all that this would signify is that normal development is occurring. A heartbeat means little else. It does not constitute life – a heart cannot sustain anything outside of a body. A heart can be replaced on the operating table with pumps and tubes. It can stop and be restarted with electrical current. It can be fully replaced in a transplant. A fetal heartbeat is nothing more than a developmental milestone — while actual sentient life is still coming. 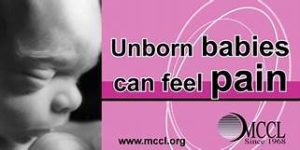 This billboard is mostly a lie. In order for a baby to feel pain, it must have a functioning nervous system. A central nervous system does not develop until the third trimester. And even then, it is questionable that pain can actually be perceived. Any movement that might be detected from external stimuli is simply reflex. It is not a pain response. And even if you believe this to be true, it still would not be indicative of sentient life. Pain reflexes are autonomic – these reflexes can happen even if the nervous system has been compromised. Once again, the science here has been distorted for emotional purposes.

But what are the pertinent statistics and facts?

I was surprised by the slim difference – which makes you wonder what the overturn of Roe would really mean. Abortions would not end or even be significantly reduced, they would simply become more dangerous.

In 2013, 89 percent of abortions occurred in the first 12 weeks. Only 1.3% occurred at 21 weeks or later. A baby is now considered viable at 24 weeks thanks to better premature birth technology. But this idea that babies are ripped from the womb and “executed” is just fear mongering.

“Democrats are aggressively pushing late-term abortion allowing children to be ripped from their mother’s womb, right up until the moment of birth. The baby is born and you wrap the baby beautifully and you talk to the mother about the possible execution of the baby.”

A President of the United States should know better. He says things like that for effect, obviously, but it is still wrong to lie about a situation that is horrible for any family to go through. A late term abortion is virtually always done with a mother or baby in severe distress – often when the doctor and mother will have to choose about who can be saved.

The anti abortion crowd intentionally uses the term “partial birth abortion”, a completely made up term. There is no such thing in medicine.

Since 1980, the abortion rate has been cut in half. And there is evidence that full access to birth control would further reduce it – and addressing poverty would do so as well.

Republican controlled legislatures have done everything possible to shut down abortion clinics. And this year, draconian laws have become the norm as the hard right sees an opening developing with the Supreme Court.

You would think that a Republican Party with a Libertarian bent would not want to have government dictate to families about what their healthcare and family planning options must be. But here we are – moving towards a Handmaid’s Tale society.

Let me add some last points. The “Abortion is Murder” mantra believes that they are protecting “life”. But the thing that sets humans apart is their ability to reason. To react in a complex way to their environment. Even after a fetus is born as a baby, it is questionable if the baby meets the requirements of sentience. A baby is totally dependent on being cared for. He or she cannot live for more than a few days without intervention. And a fetus dies if the mother dies – sentience for a fetus is out of the question.

Life at conception has even less credence. Is fertilization in a test tube life as well? All those extra fertilized eggs that are discarded – is that “murder”, too? Birth control pills – are they simply abortifacients? Short answer – absolutely not.

And then there is the “all life is precious” regurgitation coming from places that push the death penalty, have hate based criminality, refuse to meet the most basic methods of poverty prevention, and fall short in giving poverty stricken pregnant mothers the basics of pre-natal care.

The arguments are weak. The emotions are high. The tactics draconian. But that is where we are…sinking into a reproductive crisis where the rights of women suffer the most.

If we could remove the pseudo science that permeates these arguments, then we might have a civil discussion to understand the best practice methods of reducing abortions. There is actually no legal means to stop it completely, draconian laws will just move abortion underground. Law or no law, abortions will still happen. But without legality, women will simply be put at risk….and the “all life is precious” people will wonder what they can do about that problem.