Senator Dan Hall has a difficult time separating his job as a Minnesota Senator and his religious zealotry. Unfortunately, I think the latter takes precedence with him.

Every heard of Project Blitz? Think of it as an ALEC (American Legislative Exchange Council) for Christian legislators. ALEC has been promoting a radical right wing agenda legislatively – and many of their legislative proposals have been brought forward, verbatim, into many legislatures…including Minnesota.

Project Blitz affiliates itself with the Congressional Prayer Caucus, which in turn has several state legislature groups. Minnesota has its own – The Minnesota Legislative Prayer Caucus.

And there, as the chairman of this caucus is Senate District 56’s Senator Dan Hall. The three co-chairs are Senator Andrew Mathews (District 15), Rep. Matt Grossel (District 2A), and Rep. Jeff Backer (District 12A) – but Senator Hall has been the most prominent supporter.

He introduced one of Project Blitz’s highest priorities – putting “In God We Trust” in every public school in Minnesota. This has failed so far, but I imagine it will come up often in the future. 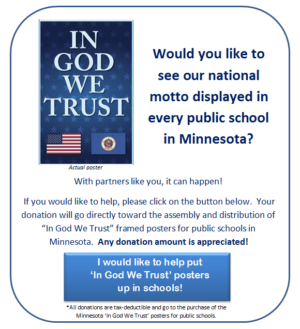 Donations are accepted of course! (Link is shut off here)

Another of Dan Hall’s prominent positions is to snuff out the legislative priorities of one of his District’s Reps in 56A, Hunter Cantrell. Hunter has been a strong advocate of banning gay conversion therapy groups. Although it came close to becoming law, Sen. Hall was busy blocking it.

And once that was completed, Sen. Hall decided to attend a Freedom March rally….a gay conversion therapy support group. City Pages did an article recently and a picture of the Senator was taken when he was talking to some of the members. 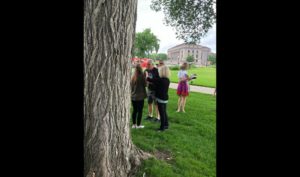 The Prayer caucus is working on our legislators – especially spiritually…

As the battles intensity in the halls of government, we are inviting churches, prayer groups, and individuals to strategically engage by “Adopting a Lawmaker” and extending a shield of protection over their “charge” – praying for a designated lawmaker every day until this session expires.

Will you be Watchmen on the Wall with us?

Yes, Sen. Dan Hall is a “guiding light” for our legislature. He will work to establish the Project Blitz agenda. Church and State are one. God has ordained it.

Is that what we really want? Is this the standard Minnesota wants?

A tracking organization, BlitzWatch.org, has been following the workings of Operation Blitz. They have been tracking 4 bills in the Minnesota 2019-20 legislature. Sen. Dan Hall has been prominent on two of them.

Note: Not everything is bad here – John Marty has a religious bill (not part of Operation Blitz) as a counter to Dan Hall’s bill. Marty’s is a sense of the Senate bill regarding Religious Freedom Day that stated the Jefferson/Madison model of religion in government.

But Blitz Watch picked it up because it was linked to the Religious Freedom Day bill which Dan Hall carved out from Operation Blitz.

Senator Dan Hall, ironically, is antithetical to religious freedom, because only the Christian religion counts. Hall latches onto the Religious Right agenda. He is committed wholeheartedly to it. And as a pastor, he still has not figured out that religious freedom applies to all religions, every single one. And that the Christian religion is not the founding principle for this country. A secular Constitution, which emphasizes and prohibits the dangers of state sponsored religion, is how we conduct the affairs of state.

Senator Dan Hall must be retired in 2020.