Our President is scaring kids. Not just scaring, he is terrifying them. 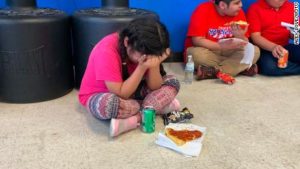 This child does not know where her parents are. They were arrested by ICE and she doesn’t know where they are or if she will ever see them again.

No kid should ever have to go through that. Doesn’t matter where they are from or what their status is – a child needs to be safe and secure. This child is neither.

When I think of tyrants in other countries, I feel lucky to live in this country. I cherish the difference between freedom and authoritarianism. But this girl thinks this country is cruel. And I am afraid I cannot disagree with that sentiment. Trump is making us cruel to this child. He is doing it and we condone it.

She has done nothing wrong. And the sin of her parents is wanting to work  as hard as they can to provide her with a better life. The kind of sentiment that everyone, except the rich in this country, shares.

ICE raided this poultry plant. They barged in as armed enforcers, terrorizing people who are just trying to eke out a living to feed their families. Some of these people have been here for years. They are fixtures in their communities. But ICE walks them out of that plant as if they are dangerous criminals and are given no chance to contact their children to reassure them as best they can.

This is cruel. It really is unAmerican. This country has done bad things in the past, but not many so callous (outside of the original sin of slavery), at least not before Trump.

But here we are – treating people, who look to America as a blessing to the world, as if they are unworthy of walking this ground, working at this hard and difficult, meager job, of living paycheck to paycheck – unworthy of being here even though they are harming no one, bothering no one. Unworthy to ask for asylum, like so many others have before.

And what about their employer? What is their role in this? Do they pay them a fair wage? Did they entice them to become their cheap labor pool with subsistence wages and a promise of a better life in America? Hiring them was illegal in the first place. The employer knows that – but this administration doesn’t worry about the employer – no, they want to punish the “infestation” of the undocumented.

If you want an article of impeachment to use, I can’t think of a more cruel and wrong policy than this one.

Democracy depends on ending this charade of a Presidency.