Yesterday I went out to the Dakota County Fair to volunteer at the DFL booth. We had some volunteers and a candidate (Sigrid) in attendance. Sigrid Iverson is running for MN State House for 36B. 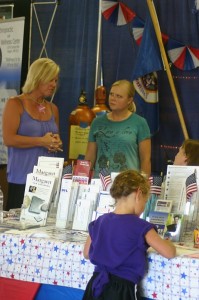 It was a beautiful Minnesota day and I was surprised with the turn out of fair goers for the first day. We were handing out balloons and stickers and they were going like hotcakes. It was a good feeling to be around the people of our community and receive positive feedback for our DFL candidates. Some of the people we spoke with were Republicans but they were willing to hear what we had to say. They also mentioned that they wanted to see change in our state government. It seems like a lot of people are upset with Governor Pawlenty’s lackadaisical attitude after the presidential election in ’08. 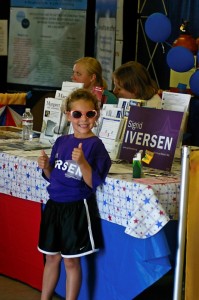 The first thing that was coming out of my mouth when I saw people was: “Are you going to vote tomorrow?”. I know how I’m going to vote and from reading this post you know how I’m going to vote as well. But what’s more important is that our entire community goes out and votes. No matter what party they decide to vote for. It’s important for all Americans to be involved in the political process and you can only do that by exercising your right to vote. America is the best country in the world because it allows it’s citizens to hold public elections. Think about places that you know of, that don’t allow its citizens to hold open elections.

One of the people that I spoke with at the fair was mentioning that some of the programs at his sons public high school had been cut due to the state deficit. He said that it wasn’t just sports programs that were being cut but school classes as well. He said his son was signed up for a computer class and the class was canceled. They ended up placing his son into a religion class. I know that its important to learn about religion but I think learning computer skills is a lot more important when it comes to getting a job.

I don’t understand how our governor and state representatives think its a good idea to cut education programs. What are they thinking?

I don’t know if anyone recalls the NBA basketball player Allen Iverson’s slogan “The Answer”. Well Sigrid Iverson is “The Answer” we are looking for. Sigrid will bring that wave of fresh air so that our state government will start thinking more clearly. Sigrid grew up in a family of educators and was taught at an early age the importance & value of having a strong eduction. Her father moved the family to Apple Valley MN when she was 8, so that he could take a job as an athletic director. Sigrid remembers her entire family being excited because Minnesota was so well known for its excellent education system. Now, she is a happily married mother of 4! In Sigrid’s spare time she is also a teacher at Eagen High School (She has worked there since 1990). Her husband (Allen Iverson) is a teacher at Lakeview Elementary and the head baseball coach at Apple Valley High School.

I’m happy that an individual with Sigrid’s background is running for State House. Most of our politicians have become out of touch with what our communities need. The best way to rebuild a weakening infrastructure is through educating our youth. Rebuilding our education programs in district 36B is Sigrid’s number one goal!

She wants our schools to receive consistent & sustainable funding. She believes that providing our youth with a solid education, will help them become successful citizens, which will create new sources of revenue to support the community. She believes that by investing into our youths education at an early stage, we will save money in the long run. Someone that is educated will go out and get a job or start there own business. They will be doing constructive things versus destructive things. She also wants to restructure the funding formula that is used to figure out how much funding schools should receive.

I voted today and I can’t wait to vote on November 2nd. This is a very exciting time in the history of our great state. We should all be a part of that history, the best way is by casting a ballot. 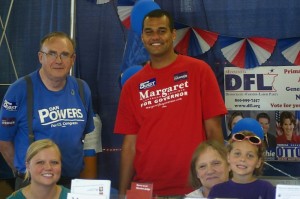