Every Minnesota remembers where they were when they heard the news of the I-35 Bridge tragedy … seven years ago today. 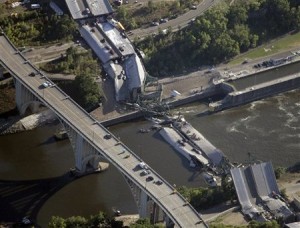 Studies have been issued since then expressing more concern of the “state” of bridges and infrastructure. According to the 2013 report titled “The Fix We’re in For: The State of Our Nation’s Bridges” found that 1,191 of Minnesota’s 13,109 bridges were deficient, up from 1,149 (of 13,068) two years before.
Over 9 percent of the Minnesota’s bridges are in need of significant maintenance, rehabilitation or replacement.
This should be a concern for all elected officials.

Congress has a role in this.
Yet, their response has been … gridlock.

Gridlock … as exemplified by House and Senate battling over funding for the Highway Trust Fund before they “shutdown” for five weeks. Acting hours before the government was to start cutting payments to the States, a temporary funding bill has been approved.

Congress has passed 12 temporary extensions in the past five years.
The latest extension will be to May 2015 … $10.8 transferred from the general fund.
The Highway Trust Fund is plagued by dwindling revenues as people drive less and automobiles become more fuel efficient. Increasing the federal gas tax is way overdue. The tax has remained at 18.4 cents per gallon since 1993 and repeated attempts to increase it over the years have failed.

In passing the short-term patch, lawmakers kicked to the Congress that will be sworn in next year harder questions about how to fashion long-term legislation to pay for mass-transit systems and repairs to bridges and highways.
“We have an immediate, critical need to address the solvency of the trust fund,” said House Transportation Committee Chairman Bill Shuster (R-PA).

“immediate, critical need” has not been something that John Kline appears to recognize. John Kline recognizes taxes … actually opposing taxes … even “user taxes” like the gas tax.

John Kline’s interests have always been to follow Washington instructions … voting for the 2005 “Bridge to Nowhere” and voted against the I-35 Bridge reconstruction as he protested “runaway spending”.

Today, we will remember the 13 people who died and the 145 who were injured … but on November 4th remember that when you go to the ballot box, you will be deciding who will address the May 2015 Highway Trust Fund expiration … do you want more gridlock ? ? ?