Which bill do you think Chairman Kline will allow a committee vote on ?

The supporters of PWFA make their case :
“Today, women make up nearly half of the American workforce. Working women’s salaries are critical to their families’ economic security, and, in this economy, no woman can afford to lose her job—that is especially true when she has a new baby on the way. While many women can and do work throughout their pregnancy without any job modifications, those who cannot do so should be able to request and receive reasonable adjustments to work duties. They should not have to prove discrimination and they should not be forced out on leave unnecessarily or fired. No woman should have to choose between a healthy pregnancy and a job.”

The Pregnant Workers Fairness Act (PWFA) is pretty straightforward :
Declares that employers are required to provide an accommodation to all pregnant employees unless it poses an undue hardship to the employer.

OK … so you get the drift … if you are pregnant, women can stay on the job continuing to earn a paycheck.

Why is this on Chairman Kline’s docket now ?
Well, did you hear of the case of Peggy Young ?
Peggy Young worked for UPS as a pickup and delivery driver. When she became pregnant in 2006, her doctor restricted her from lifting more than 20 pounds during her first 20 weeks of pregnancy and 10 pounds for the remainder. UPS informed Young that she could not work because the company required drivers in her position to be able to lift parcels weighing up to 70 pounds. As a result, Young was placed on leave without pay and subsequently lost her employee medical coverage. Young complained because UPS made allowance for other employees to the weight lifting requirements.
Peggy Young eventually filed a lawsuit … and in March of 2015 (yeah the wheels of justice move slowly), the Supreme Court ruled in favorably in her case … remanded it back to a lower court.

In short, it’s a mess … “favorably” did not change anything … so Congress needs to rewrite the law.
And in this case, the Republican-sponsored bill could actually make matters worse. Under the proposed Pregnancy Discrimination Amendment Act, a pregnant worker must identify other employees who are disabled and received accommodations in order to prove she should also be accommodated. But if the employer accommodates no one, the pregnant worker is out of luck. The bill wrongfully assumes that every woman has perfect knowledge about every other employee in her company and unlimited time to identify these other workers, make her request, and receive an accommodation. Unfortunately, for most women, particularly women with limited bargaining power, women who are new on the job, or women in low-wage jobs, that requirement effectively blocks them from ever receiving an accommodation.

Once again, the question … Which bill do you think Chairman Kline will allow a committee vote on ?

Let’s save time … email Chairman Kline and tell him to allow a vote on H.R.2654 – Pregnant Workers Fairness Act. 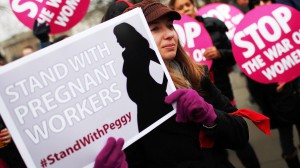